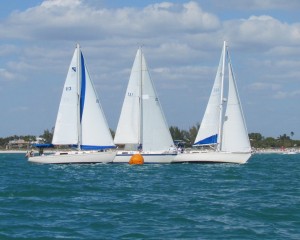 LSIS  (Lake Simcoe Interclub Series) are a series of races organized by a committee which consists of members from each of the yacht clubs around the lake.  Currently, David Jewitt represents HYC on the committee.  I have been on the committee representing KBYC.

The committee makes up the Lake Simcoe Yachting Association (LSYA) and organizes these races in concert with the host clubs.  They issue PHRF-LO (Performance Handicap Rating Fleet – Lake Ontario) certificates, which are the boat handicap certificates for clubs that are not members of PHRF-LO.  These PHRF handicap certificates allow boats to race in the LSIS series races.   Some clubs, such as BYC and KBYC have their own club handicappers and are members of PHRF-LO directly.

HYC has traditionally been part of LSYA and has hosted races until 2011, when the HYC board decided to withdraw from hosting because of some rowdiness  and damage that took place on the race weekend in 2010.  HYC members are still welcome to participate in LSIS races, but because HYC is not a member of PHRF-LO, individual skippers must get their PHRH certificates  through LSYA which require sail measurements, etc.   Boats that have raced before simply renew their certificates each year at a cost of $25 payable at registration for the first race of each season.

In addition, there is now a requirement for skippers racing to be members of OSA (Ontario Sailing Association) which oversees the LSYA races.  If a club is a member of OSA, its members are automatically members of OSA.  However, the cost of a club joining OSA is expensive as they assess $22 for every boat in the club.  For HYC to be a member of OSA would cost the club about $1400, which is a lot of money given that only a few boats might race in LSIS races.  For that reason, KBYC and HYC are not members of OSA.  That means that individual skippers who want to race in LSIS must buy an individual membership in OSA at a cost of $22 per year by joining OSA’s Maple Leaf Club.

So, to summarize, anyone from HYC who wants to race in the LSIS series must

2. Obtain or renew a PHRF certificate through LSYA ($25)

LSYA uses the money collected to pay for race flags for 1st, 2nd and 3rd place in each division.  (Flying Sail, White Sail LOW, White Sail High) as well as trophies and an annual banquet in October at BYC.

The races are a lot of fun and allow boats to compete and socialize with sailors from other clubs. Check out HYC’s Calendar for the 2014 race dates.

As announced by the Ontario Government on May 14th, sailing clubs may re-open on May 16th following all public health directives.